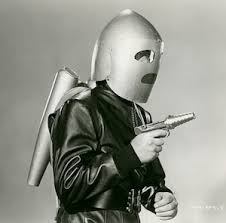 Nostradamus gazed into a font of water to see what tomorrow would bring. Often he would drop a single solid gold coin into the bowl just because he liked to hear that “kerplunk” sound.  Quirky, but bankable.

Jeane Dixon used a fax machine and a hair dryer– making mostly inaccurate prophesies from her bathroom, often seated on her throne in Queens. Her secret?  Sponge baths, foot soak and an incontinent poodle. Today she is most remembered for her supposed prediction of JFK’s assassination and a horoscope book for dogs.

Trends. Futuristic forecasts. Oh, how unpredictable the predictable can be.

For a number of years now I’ve been using my own predictive devices– a chipped Fiesta bowl filled with guacamole and a cocktail stirrer from the late Edgewater Beach Hotel– to tell the vintage future. Corn chips shaped like Donald Trump’s head, circa 1980 (more hair, less spray) also greatly assist my cognitive abilities, but that’s optional. Today a single Dorito can be used in his place, the difference being virtually undetectable, even to multiple ex-wives.

So flashback with me now as we revisit my Top 20 Fiesta/Guacamole/Chip-induced predictions from a mere four years ago: Obama had just been re-elected, Hurricane Sandy was hitting the East Coast and Bruce Jenner still had the balls to be a Republican. Some things never change.

We’ll rate these stale premonitions as FALSE, STILL TRUE, MOSTLY TRUE or JURY’S OUT. Basically the same verdict as the O.J. Simpson trial.   So again, in 2012, I predicted:

2. Cufflinks Are To Men What Shoes Are To Women. How can both sexes possibly need another pair? Yet they do– and they’re not sharing either obsession with their children.

3. It’s OK to Alter “As Found” Antiques. Say goodbye to dark wood furniture. Finally it’s acceptable to take these brown elephants and strip and stain them into designer colors (that aren’t white!) High quality “as is” vintage furnishings are fair game for alteration.

VERDICT: MOSTLY TRUE. However “All White” is now making a nasty comeback in unfortunate supremacist corners.

4. Straight Razors & Shaving Paraphernalia. Beards, mustaches, sideburns– they’re all back in the fuzzy fashion of half-shaven men. No electric razors in this hairy fraternity, this groom is grooming. I see no end in sight for the desires of the hirsute.

VERDICT: MOSTLY TRUE, but trimming back.

5. Wristwatches. Not that time has ever been hard to grasp (see your iPhone/Android), but collecting timepieces and wristwatches will return like there’s no time left. New designers will continue to knock off vintage styles, pushing old time and timers into the rarefied pricing air.

6. Royal Copenhagen Ceramics. The vintage Scandinavian craze continues but serious collectors are getting serious about the pottery of Nils Thorsson. Though they look like props from “I Dream of Jeannie,” that’s only half the attraction. In our glaze into the future the quality of Thorsson’s product designs override the kitsch factor.

7. Hello, Facebook: Good Buy vs. Privacy. Facebook’s Marketplace morphs into the upscale answer to Craigslist. Online hook-ups are a bore compared to scoring real family jewels– or fashions or furnishings. The new STD is: “Sell That Designer” (fill in the blank.)

8. Vernacular Snapshots & Film. You have a camera w/phone in hand. But where’s the film? It’s obsolete. Snapshots are history on a paper that we don’t produce anymore. Yet in basements, attics, garages, thrifts and fleas they’re being snapped up faster than a Polaroid One Step. Here’s one instance when technology killed a market while boosting another. When Bill Gates and The Getty Museum are buying up vast vernacular photography collections from even minor collectors, this story is far from developed.

9. Estate Sales. Nothing to do this weekend? Estate sales have long been THE thing to do and everyone is having one. Even people who aren’t dead yet. Why wait to die when you can sell right now and drink your profits tonight?

10. Taxidermy. Whether you’re a designer, an oddities collector or just a hipster in need of a broader hip, good taxidermy is a dying art with a second life. Consequently demand and scarcity command big prices in this narrow field of dead prey. Though political correctness often limits availability, quality items are the real rarities in this under-stuffed market.

11. Vintage Guitars. While Hai Karate morphed into Axe for Men– both attempting to make men more desirable for mating– the romantic/machismo of being a rock star never missed a beat. Nor did the prices on quality Axes. Don’t tell me bad boys don’t get more action than good. (See bad girls… frequently!)

12. Breweries Never Die, But Cocktails Toast Forever. The cocktail never really left us– We just stopped serving him after that inappropriate comment he made at Thanksgiving dinner about your mother and her semi-nude SPANX. Apparently “giblet” isn’t always a term of uterine endearment. Who knew? Still, responsible drinking is always in fashion– unlike “responsible smoking” which never really caught on without someone getting bitch slapped.

13. Generation Y Craves Drama. All that angst, all that pain and suffering of being 20-something. Exactly why the Victorians invented the fainting couch. It was all too, too much! But if you still seek that extra crispy dramarama of life, look no further than the Baroque, Art Nouveau and Arts & Crafts styles of the 19th century for a solid decorating breakdown. Gilt (guilt!) chandeliers, snuff boxes, sterling cigarette cases (for calling cards, of course.) There’s nothing sadder in your future than something you didn’t buy today.

14. Men as Dandies / Dandies as Men. With working environments becoming ever more casual, formal occasions will see men dressing in more sartorial attire. Pocket squares & dapper colors will show off a more adorned evening attire even in the straightest of men. The future’s so bright because sexuality has never been more gray.

15. The Unfrozen Ice Breaker Question. “Where did you go to school?” will be replaced by “What do you collect?” Now everyone is a would-be designer, professional collector, kitsch expert or hop scotch champion. The future will be filled not only with more interesting people but also more interesting questions. The collecting craze will redefine itself once more with the assistance of vintage reality TV– and it will be just awful.

16. Italian Glass. Is it Murano? Or just Murano-esque? Is it an ashtray? Doesn’t matter. As long as the signature is acid etched and/or retains the original label. Point is: Glass has been blowing hot for many a year and there appears to be no turning down the temperature in this collecting kiln. The only way to get burned is to overpay.

VERDICT: FALSE (See: I Lost My Ass in Glass)

17. Found Objects, Lost Objections. Another recent trend with no end in sight, mostly because collectors never seem to run out of alleys to plunder and pillage. Yes, there are thousands of online sites that illustrate the step-by-step method of turning a hubcap into a chrome beret, a kicky bathroom ceiling fixture or a rusty Chip & Dip Set. Recycling will be to decorating what Kathy Griffin is to Anderson Cooper: Snarky Girlfriends.

18. Lighting. Now that your love affair with all things IKEA has ended badly (due to that near fatal cinnamon roll overdose on a lumpy futon), has a light bulb gone off in your head? Has your bookcase collapsed like a smashed Swedish meatball?  If so, then there’s only one thing we can all agree upon: the future needs better lighting. Especially great vintage lighting. So don’t curse the darkness and spend the money. Lighting prices rarely fade.

19. Artificial Limbs and Railroad Timetables. Believe it nor not, this is a very real request of one of my hardened collector friends who will remain nameless, if not unscheduled. Yes, this may conjure up an uncomfortable image in your head but it’s the disturbing thought that counts. Everyone collects something. Who appointed you Judgy-Wudgy Bear? Face it: one man’s trash could be another man’s stomach pump collection. Yet what does the future hold? In this one collector’s dream train, apparently a leg up on someone’s botched travel plans.

20. Celebrity DNA. Have I gone too far? Just around the future’s corner are concepts we’ve barely dreamt. If John Lennon’s tooth can bring $31,000 today, consider what tomorrow may bring? More wisdom than a bridge could cross. A DNA sample of Marilyn Monroe’s hair might be cloned into endless varieties of beauty products and/or Irish tax shelters. And there’s certainly enough of Michael Jackson floating about to create some thrilling talent treatment or other: Billie Jean Two Point Oh No! Or might Monica Lewinsky’s little blue dress have the last laugh… if not offspring?

And that’s the thing about the future. It just keeps giving–