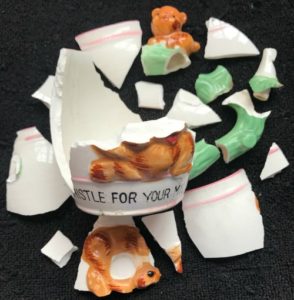 In the early morning hours just a few dizzy days before Christmas/2018, an angry ruckus of a cat fight erupted atop my refrigerator.

I didn’t see it happen—felines Mistacha and Buster being the likely suspects in the brawl— but I reluctantly heard that all-too-familiar crash of  tchotckes headed south.  And though no fur was flung, big tails greeted me with even greater surprise, each pointing to the other like children caught in a prank gone bad.

On the kitchen floor laid the remains of a child’s ceramic mug. At it’s base once ran the black lettered words “Whistle For Your Milk” while across it’s relief had been a small embossed bear missing both of it’s googly eyeballs, the lost stare gone for years unknown. The green handle of the mug once formed a tree branch while a smaller three dimensional bear rode it’s stem to the tip of the whistle spout. Marked “Made in Japan” on the bottom, I believe the year “1962” was perhaps beside it in a circle, though this I may have misremembered due to advancing age and my losing love affair with better brands of vodka.

All was silent and still– like a crime scene awaiting some slow forensic reveal. Save for two kitties who fast scampered into opposite rooms of excusable refuge, my kitchen floor was now splattered with a few dozen shards of something that was once rather wonderful. The Whistling Bear Milk Mug—inadvertently left atop the refrigerator long ago during a lame attempt at cleaning/organizing—had taken an unsurvivable fall. Or, more likely, it was pushed. During any wild and unwinnable swatting of angry paws, few items ever successfully dodge the tumult. But the point, like the mug, was moot.

Now for those of who have read my vintage memoir, I make an early mention of my four-year-old self watching the lunchtime broadcast of Bozo Circus, the show suddenly interrupted with news of the shooting of President Kennedy. “Who’s he?” I would ignorantly mumble.

On my menu that day was a PB&J sandwich and it’s requisite partner, white cold milk– and held tightly in my little hands was this very “Whistle For Your Milk” Bear Mug. Until meeting its demise during the Mistacha/Buster brawl of Christmas/2018, I had all but forgotten about it. Now I wondered if it had forgotten about me as well?

As I moved from childhood to adulthood to more “hoods” than I can recall, schlepping my possessions more frequently than a senior member of the Witness Relocation Program, that little mug was packed and unpacked time and again with all the carelessness of a drunken UPS driver. I’ve always been sloppy with my things and that Whistling Bear Milk Mug took the brunt of my inattentiveness. Its ending—an accident assuredly, was my fault and my negligence, the blame self-evident. It’s what I got for not being more thoughtful and considerate, for not appreciating something that had been with me for some 50 years, all the while it asking nothing in return but safety.  And now?  Rest in pieces.

Some of you must think this a special bit of kitty kat karma for a guy who wrote a book about the importance of collectible objects in one’s life. In this, you would not be mistaken. “People are their things,” I’ve stated as the topic sentence in countless print, radio and podcast interviews. “People are defined by what they collect and cherish.” Yet what does it say when you lose a part of yourself, even if that part is extraordinarily minor?  Imagine those who lose their home and every belonging in a fire, save for the shirt on their back: the loss is devastating; the weight of it all, soul crushing. All one could do is hold your loved ones– and yes, most especially your pets– close and closer still.

In context, the big picture loss of something as insignificant as a Whistling Bear Milk Mug seems near ridiculous, even silly. But I’d be remiss if I didn’t admit that a tear or three was shed that morning as I scooped up the remaining shards and inexplicably placed them in a plastic bag for a reason I have yet to rationalize. (I wasn’t– and still am not– able to just toss it out.) I was miserable most of the day that followed, but why? An object I hadn’t used in 50 years was gone and beyond repair. What did it matter? Superglue couldn’t fix the physical object or my mental state. Why did this bother me so? Was a part of my childhood lost? Did an old man’s memories chip away so easily?

In the end, it’s hard to brave the shallow waters of sentimentality, nostalgia, pathos, or even death, without first drowning in a pool of one’s own self-actualized clichés. Or as the poet Cher so aptly said with a face slap: “Snap out of it!”

Still, something critical happened over Christmas/2018, and it happened not just to the Whistling Bear Milk Mug and me— but to you as well.

You see, something troublesome had been brewing for some time, something seismically disturbing. Worrisome. Shattering. For many of us, this past year has witnessed a great dismantling of so many things we thought were solid. Unbreakable. Forever. Over the span of our collective lifetimes, these concepts moved with us over and over again; in our minds and memories, in our empathetic souls and patriotic hearts– always there, always safe, packed away in a mental box, our most precious freedoms secured. Our freedom of speech. Our freedom of press. Our humanity, such as it was, always seemed beyond the evil of our own inhumanity. Or so we had wished.

I’m going out on a broken ceramic limb here, but I’d guess your childhood self never held an “alternative fact” for long. To those who attended Catholic school, such falsities were called “LIES” and they were met with a visit to the principal’s office and/or a hand slapped beating from a worn out wooden ruler. Cruel?  Yes.  Christian?  No.  Such violence to children or anyone should never be repeated, but…

Today, I know right from wrong. You do too. And not because it was beaten into us, but rather because we grew into adults who recognized that truth mattered. Facts are real. Errors have consequences. As an adult, you know when you’ve lied, misrepresented the truth, spoke dishonestly. Others may feel the need to point out your deceit, but you knew it first, deep down and low.

It was only a few short years ago when a person who committed such infractions would apologize and say: “I’m sorry, I misspoke…” and then attempt to correct the damage they had done. Naïve? Simplistic? Absolutely. Still, that resolution worked. It was, is, and will always be what honorable people must do. There is no other moral response to the inadequacy of falsity.

Today, however, our rulers lie, then beat us with their own overly repeated falsehoods until the lie becomes their faux truth. And then ours. And that’s not who we are or who we wish to become. Perhaps only the passing of time will reveal if our current social upheaval can be fully restored, repaired and set back together like Humpty’s Last Dump. Democracies get chipped, sure– but Democracies also shatter. Still, this is all I know:

Now is not the time to blame the cats, or blame oneself. The ship of state has sailed to sad result. Think Titanic. Think Challenger. Mistakes were made. Accidents happens. Shatterings (and shat) happens.

Now is the time to be thankful for what we had—and had together– and perhaps all too briefly. Those former times… well, they weren’t perfect. Perfect (see: Mint-in-the-box) exists only in our precious vintage world, not in our day-to-day dealings with cancer, mass shootings, the opioid epidemic, and an immigration policy that would make the Statue of Liberty hightail it back to France.  “And you can keep your damn base!” she’d shout back.

No, now is the time to be ever more mindful of everything else we stand to lose by staying seated, silent, sedated. Now, today, take nothing for granted. Nothing. Though not yet a year as perilous as 1865 or 1939, 2019 will define our country like no other time in your life; the revolution is both celestial and political. Regardless of your age, race, sex, orientation, nationality, partisanship or affiliation, 2019 will change you.

The American outcome, and not simply that of Republicans, Democrats or Independents, will be shard sharp by 2020, the vision and direction irretrievably righted or wronged.

You know how to whistle, right?

It’s time to childproof the kitchen, kitties. And our country.