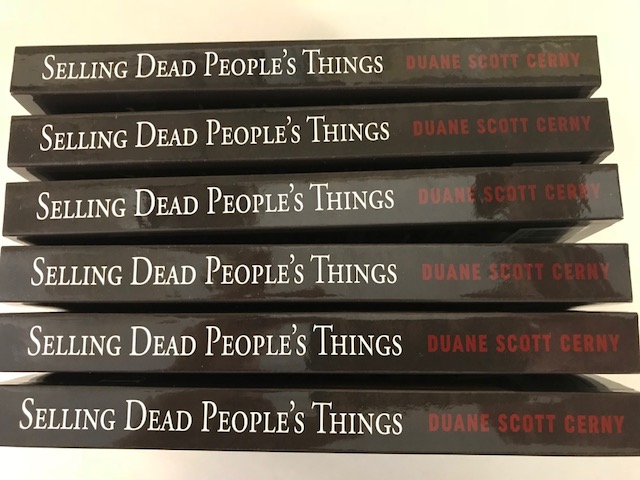 (Author’s Note: I had pleasure of meeting Christina Zawadiwsky in August/2018 at Milwaukee’s Antiques On Pierce at an event sponsored by the Boswell Book Company. After my reading, awash in a small but enjoyable wave of book signings–“What’s today’s date again?”– Christina discretely and quite politely slips me a note with her contact info… barely whispering into my ear: “I am a poet as well!” A few days later she offers to review my book. (Amazon, your loss!) And now today I present to you Christina’s kindly compelling words. Blessedly, a poet indeed!)

“Our objects define us, an old saying tells us, and as I was viewing the McQueen Movie (biopic of fashion designer Alexander McQueen), I realized that the dresses (objects) he created and the performance art myths he presented with them to the world did tell his life story in a cryptic and poetic way. So you’d think that Selling Dead Peoples Things, by Duane Scott Cerny, would be a book about objects, but it’s not – it’s a book about the people who owned these objects.

Cerny has a knack for meeting the most unusual, touching and driven characters in his pursuit of estate sales to fill his vintage antique stores. He cries, sympathizes, laughs and empathizes with so many, even to the extent of buying goods while not really knowing what they are (to help a distraught relative of a newly-deceased person) or rescuing a white German shepherd and a dove after their owner has fallen ill for the last time. Cerny buys merchandise from a fellow Bohemian who tells him the story of how he and his brother survived the Depression by being sheet music pluggers, meets the man who played the coroner in The Wizard of Oz, deals with Colonel Truth and his ventriloquist’s dummy Bob (which recalls the film Magic), and experiences a supernatural being who transmits through an unplugged TV set, all the while maintaining first The Wrigleyville Antique Mart and then The Broadway Antique Market in Chicago with his partner Jeff. And there are so many more stories that prove to us that truth is always far more interesting and unpredictable than fiction!

Cerny claims that vintage is a “portal through which anything can pass, life or death, normal or paranormal,” and by saying this he is very much attune to the Borges short story “The Aleph.” We are all human and bound to this earth and the objects we use in it, either for the sake of practicality or as symbols of who we are or who we hope to become. Money necessarily enters into this equation, and Cerny is a successful dealer, but he also obviously cares so much about telling the stories of those he’s known so that they will be remembered, their names etched into history within his book. And Cerny himself will be remembered – vividly – for his enthusiasm for the art of resale, which, like wildfire, is inspiring and catchy and requires an enormous amount of work as he speaks to us of all those who created or possessed these objects, these talismans. Would that all of us felt so deeply about the fears, tears and joys of those with whom we’ve interacted during our lifetimes, especially those who by being different from everyone else have taught us so much about ourselves. The universality of Cerny’s voice and vision ventures into a territory that is the most prized territory of all – the territory of the human heart and what we’re certainly meant to do with it – help each other through life’s difficult transitions.”

About Christina Zawadiwsky: Acclaimed Poet, Artist, Journalist, Critic and TV Producer. Selected Poetic Works: “The Hand on the Head of Lazarus / Sleeping With The Enemy / The World at Large: Prose-Poems”