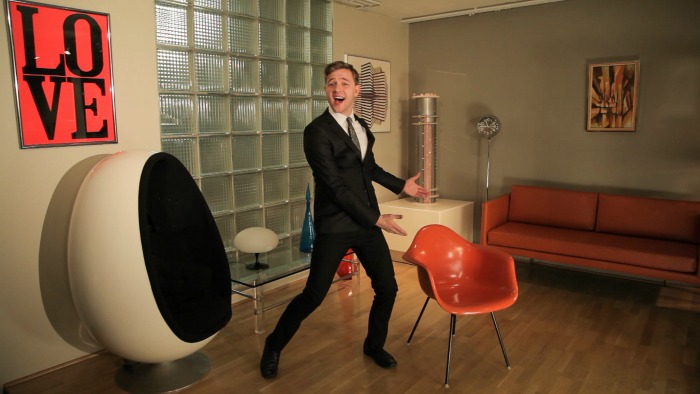 A love song about mid century modern design?  Is this a musical first? Do we care?

Says song lyricist Danny Alias, “We wanted to tell a simple story that would speak to today’s young, vintage buying client, to take them on a retro dream, a mid mod fantasy.  Not sure we succeeded, but it was crazy, campy fun.”

Actor and cabaret artist Jordan Phelps delivers some Broadway-bound vocals to inspire this retail flashback. I must credit Debbie VanLeeuwen-Bellingham of the Herald News with this spot on review: “Watching Jordan Phelps is like listening to Josh Groban while watching Fred Astaire.”

While standing in a vast showroom of vintage modern furniture, Jordan Phelps captures a curious timelessness as he contemplates good design, and sings– “This is yesterday’s future… today!”

Works for me… DSC

Danny Alias (Lyricist/Video Writer/Director) has been in the “business of showing” since the early 1980s. As co-founder of Persona Records, Chicago’s earliest House Music label, he helped launch the careers of Frankie Knuckles, Jamie Principle and countless others artists, co-producing 3 of the top 25 House records of all time. In 2015 his cult single “Civil Defense: Reworks” was re-released by French savant Ivan Smagghe’s KILL THE DJ label, the pop duo GET A ROOM, and more British bootlegs than he cares to admit. Contact: AliasDanny@Rocketmail.com

Mark Contorno (Composer) has been creating music and theatre for over 40 years, writing, directing and living his art. Among current projects: 2 Tommy Jameson plays, “Princess Pig Face” and “Murderous Innocent,” plus a production of his long lost classic, “The Harlequin.” Contact: MarkContornoSongs@gmail.com