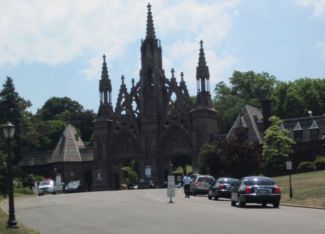 In the 18th & 19th centuries travel wasn’t easy, especially if you had very little money. Hence the closest attractions were the most popular. Not surprisingly, Niagra Falls quickly became the #1 tourist attraction of North America. They came for the running water and stayed for the souvenirs, wax museums, Believe It Or Not emporiums and carnival food. Miniature golf grew to near Olympic scale popularity at Niagra Falls, then fizzled. Much like life itself.

OK, you can see where this is going: Niagra Falls was #1, but what was #2? Yes, Green-Wood Cemetery of Brooklyn, New York. (Crazy, right?) Carved by the glaciers, our original landscape architects, the public discovered 478 rolling acres of hills valleys, pond and cobbled pathways. And dead people by the ton.

In its heyday over 500,000 people a year would visit this dark Disneyland and it was oh-so-very efficient. Carriages would meet visitors at the gates and deliver them to their final date with whatever descendant was hitting the earth.

In a single day, 5000 mourners crossed the river by ferry to honor their fallen hero William Poole aka “Bill the Butcher.” A giant of a man, a butcher by trade, a prize fighter at nights or when he was drunk. But how did he manage to get his ticket punched at Green-Wood?  Turns out Billy bet five thugs he could beat them all for the price of a $5.00 gold piece, but before Billy could even take a swing at Thug #1, Thug #2 shot him in the heart and arm. Supposedly Billy continued to fight, later succumbing to his injuries and still looking for his $5.00.  By now he’ll take a Metrocard.

Opened in 1838, Green-Wood quickly became the most famous cemetery in America. Well before the garishly wonderful Forest Lawn of Hollywood Hills filled up fast with the stars of yesteryear, Green-Wood had the ORIGINAL celebrity monsters of the 18th & 19th century.

Be they famous or infamous, poor or wealthy, the gangsters and their girlfriends, the artists and actresses, and those all those obscenely rich (pre-income tax!) Captains of Industry, Green-Wood was the place to be seen. At least for the last time and forever.

Among a flew of the notables below ground: Boss Tweed, Peter Cooper, Lola Montez, Horace Greeley, Louis Comfort Tiffany, Frank Morgan, Currier & Ives, Underwood, Steinway, Squibb, Pfizer, F.A.O. Schwarz… even Leonard Bernstein & Jean-Michel Basquiat. It also appears that many Civil War generals decided in advance to end up at Green-Wood. Revolutionary heroes grace the grounds in advance of us all, plus about another half million others in various forms of internment.

This is not to say that Green-Wood hasn’t buried its share of trash. There’s a common theme among the many late residents, be they gangster, crooked businessman, sketchy politician or fallen woman: if you had enough dough, you could get away with murder. Routinely. And if you were really famous and/or infamous, but still dead broke poor on the slab, somebody just might buy you a headstone. Eventually.

But there’s a greater, near secret significance to this cemetery that makes it so wonderfully disturbing. Beyond the Victorian Gothic entry arch are architecturally significant mausoleums by the thousands. Matching these are an endless death parade of sculptured saints, inventors, macabre animals, fantasy phantoms, and enough cherubic angels to make a really soft roll of toilet paper cry.

Now hold onto your old, very cold, er hat. Because the land itself remains historically significant to those us among the living. From it’s grand inception Green-Wood Cemetery has reached across the centuries to influence the very land upon which we live, work, shop, and eventually die. And hopefully in that order.

Predating and inspiring New York’s Central Park across the river, it defined the use of public, free space. Before parks existed families took off to the cemetery to make a holiday of it; pack a picnic basket, grabs the kids and off to the cemetery we go. Hey, sounds more like “living” than spending your day on Facebook.

Many years later major cemeteries throughout the country would build hotels and restaurants nearby, sometimes even on the cemetery properties themselves. It’s a long way home after a long day at the cemetery. Popular cemeteries near large cities often had railroad stations directly adjacent. Hence, funeral trains.

So Green-Wood is the grand, Grand Daddy of them all. It is also said that Green-Wood is the model upon which today’s suburban sprawl is based. Think of it as the grouping of like-minded individuals. It’s good to know that in death we can all finally agree on something.

As urban planning evolved over the centuries, all cobblestone paths would lead back to Green-Wood.  If you stumbled off the trail you’d discover that this is the place where residential living– whether living or dead- is not consequential. As the old saying goes, “The dead were the first to move to the suburbs!”

So before there was NYC’s Highline, that park in the lofty Chelsea air, there was Green-Wood Cemetery.

Note: A 3hr.+ walking tour of Green-Wood entitled “Scandals, Scalawags& Murder Most Foul” is available for those who own comfortable shoes. Many a great story is matched to gravestone. www.green-wood.com