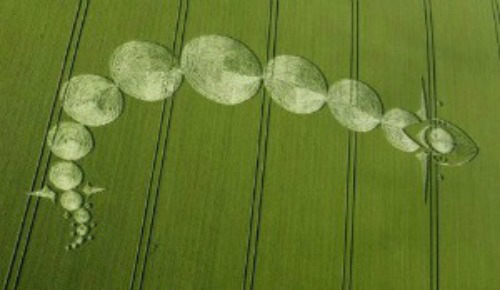 In a startling find that has confounded both the brilliant and the ignorant, an English Crop Circle has heads–and balls–turning.

While scientists debate the relevance of this recent conflagration, other less educated folk are flocking to their local 7-Elevens and Quickie Marts to play the numbers designated by the descending balls.

Said a local farmer, “It’s like turning your head and coughing money!”

For the first time in the history of crop circle research a double prediction has been made on a most perplexing level. Located in an obscure part of the English countryside called “Abbey Normal-on-the-Spanx,” the circle simultaneously details the DNA sequencing of Rupert Murdoch’s left testicle AND next week’s winning lotto numbers.

“It’s an incredible discovery!” says British physicist Sir Lord Buckingham of Fulton-Charlie Sheen. “I’ve seen DNA strands before. I’ve also pulled down a few numbers off the National Lottery. But never before have I seen a combining of the two. It’s either the foretelling of a coming apocalypse or a great opportunity to make a buck. Personally I’m betting on the latter but preparing for neither. After all, I’m a scientist, damn it!”

But American experts see it differently– mostly because they visit their eye doctor as often as they see a dentist, a fact that decays international relations and whatever affixed British teeth remain intact.

Professor G. Whizzer-Guilt of the University of Phoenix recently cited, “I can categorically state that the newly discovered English Crop Circles are as authentic as my degree from the University of Phoenix. In fact, not only is my online degree as legitimate, I can also download my diploma and print copies of it at home. I doubt the English can beat this level of integrity– even while wearing snow shoes and a tracking device in a corn field of hoax!”

To date, no one has come forward to deny that the DNA sequencing is anything other than Rupert Murdoch’s naughty (and tiny) bits. Concurrently, multiple wives have come forward to identify the withered sequence, often while wearing gloves or poking at it with a rolled pre-nup.

Murdoch’s first wife, Lady McMuffin McMurdoch of the M.C. Hamburglousters-On-Toast testified in an unrelated sperm/egg paternity suit that the strand was, quote, “the shriveled strand of her late husband.”

(Author’s Note: Rupert Murdoch IS NOT dead yet, but in the interest of internet accuracy, this article and his first wife are simply planning ahead. See Roger Ailes, Media Stud of Trump TV.)

Back across the murky pond the controversy continues. As 43 of the 50 American states have a lottery,  it is debatable in which state these numbered balls will drop. This confounds true believers and those living with aluminum siding or wheels under their living rooms.

Said a local yokel from a decidedly red state, “Do I believe in aliens?  Yup!  And that’s why we need a wall keeping the Canadians out!”

That attitude appears to be growing. A recent USA/CNN/DNA/NRA poll of lottery players echoes the sentiment. While only 2% of those surveyed believed in extra-terrestrials, 15% believed in the existence of extra testicles, while a shocking 85% believed these crop circles are, in fact, predicting winning lotto numbers. Most also believe Ann Coulter is actually an elderly man who went missing after hooking up with the Loch Ness Monster on the Scottish version of Tinder.

Even more disturbing is that all of this adds up to 102%, defying both the odds of logic and the abacus on my smartphone. Like the upcoming presidential election there is a 5% margin for air– most of it coming out of suicidal members of the RNC.

But the questions remain: Are beings from another planet messing with the very structure of human DNA? Or did Murdoch’s media empire phone-hack into the cosmos and piss off an intelligence greater than Robert Snowden during an NSA leak?

Are aliens accurately predicting winning lotto numbers to bring down the world economy?  Or will Park-All-Day-Twelve-Bucks succeed Kim Jong Un as the president of an unstable North Korea?  Call out the horses!